From coast to coast thousands of Canadians who are helping the most vulnerable members of our communities go unnoticed. They do it not for a bonus, special mention, or even a shout out. They dedicate their lives every day to make a difference. That’s why CharityVillage has partnered with the Bhayana Family Foundation and the United Way to celebrate the invisible Everyday Heroes of the social services sector and bring their stories to light. Together they travelled across Canada to capture their stories on camera and create a series of video biographies of three recipients of the Bhayana Family Foundation Awards.

Giving to Others From the Heart

The first hero is Justin Eweka, a frontline worker at a community agency called Club Inclusion in Halifax. Inspired by his relationship with his sister, Justin embarked on a life-changing journey to help others like her. “I realized it was just a lot of fun, and it never felt like a job. It was never hard or felt difficult to go and do it. It was just a good time, and it was awesome seeing them grow and achieve different things. And I just love it honestly, I can’t see myself doing anything else,” Justin says.

Prom may be just another memory for most of us and it’s an experience many of us take for granted. Realizing that many of the youth at the Club didn’t get to experience prom, Justin decided to change that. By using his own money to hire a limo service, he committed to throwing the ultimate prom experience for his friends at Club Inclusion, complete with the biggest, pink-est stretch limo in Halifax — making prom night a moment to cherish for the members of Club Inclusion.

Najia Elancel volunteers at the Collingwood Neighbourhood House, a part of the network of centres that brings people together. Najia showed us how even personal trauma can blossom into something beautiful. This resilient former victim of partner violence inspired us with her mission to empower other new Canadians, one meal at a time. Najia came to Collingwood Neighbourhood House after fleeing her abusive marriage with her young twin boys.

After volunteering with the place that once helped her in a time of need, Najia realized the beauty of giving back. Najia has found her purpose in the kitchen feeding the bodies and souls of the Collingwood Neighbourhood House. She uses the universal language of food to build community, break barriers and welcome newcomers. As Najia quite eloquently put it, “it’s not like we choose to do what we do because we want to get rewarded for it, we do what we do because we love to do it. Especially for me, I do it from my heart”.

Developing the Leaders of Tomorrow

360 Kids is the life mission of the third everyday hero, Bonnie Harkness. 360 Kids provides support to the most vulnerable of our communities – at-risk and homeless youth. In one of Canada’s largest metropolitan areas, youth often fall through the cracks. Bonnie, a champion of youth in the York Region of Toronto, works tirelessly to support them even when they have lost hope in themselves.

Her innovative programs not only provide safe shelter, warm meals, education and access to employment opportunities but also helps shape them into responsible, giving members of society. By supporting their growth, Bonnie invests in the foundation for their future and the development of future leaders. As Bonnie puts it, “They come through because the food and recreation, but what they get when they leave is so much more. It pays off, that when you put the effort in, the kids actually benefit and they move on and that’s all that we want.”

Changing Lives for the Better

Its people like Justin, Najia, and Bonnie who inspire us to make a difference in our own communities for the betterment of society. That’s why we support the Bhayana Family Foundation Awards and the United Way as they recognize the Everyday Heroes in social services that go above and beyond for those in need.

To learn more about the partners, connect with the United Way & the Bhayana Family Foundation on social media (details below) or tag them with #EverydayHeroes to help spread the word about these invisible heroes in your community. 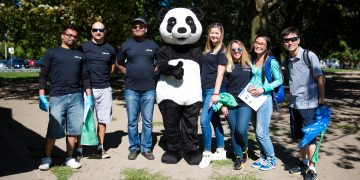