YOU ARE HERE:Home » CSR » 6 significant moments that shifted business from “for profit” to “for purpose”
CSRFuture of WorkImpact Culture The last two years have been a bit of an anomaly when it comes to giving back. Over the last year, and especially in the last few months, things appear to have changed. “Rage giving” seems to be waning as stalwart causes are resuming their top place in the ranks; but more importantly, there has been more talk than ever before about business becoming the force for good—both for society, but also for individual well-being.

Sound like an alternate reality? Sona Khosla, Vice President of Marketing at Benevity shows us what brought us here by taking a look at last year notable moments.

Larry Fink, CEO of BlackRock, kicked off 2018 with a call for purpose and profit

In January, Fink told the corporate world that if they wanted any of the $6 trillion in assets that Blackrock manages, they needed to do more than just pursue profit and deliver compelling math; they needed to make a difference in the world.

Companies serving a purpose that’s higher than profit is not a new idea, but this was a watershed moment in the business landscape where all evidence has started to point to profit and purpose being inextricably linked. At Benevity, we’ve been hearing first-hand from leaders at companies that Larry Fink’s article raised the profile of their Corporate Social Responsibility (CSR) programs, making their roles and initiatives more strategic than ever before.

Looking ahead: We expect that more companies will embrace a “for purpose” strategy as it becomes integral to attracting talent, culture-building, brand differentiation and bottom line success. Executives will invest in new approaches to their outdated corporate giving programs as a source of renewed purpose for their people, customers and communities.

Forbes announced that 2018 was going to be the year of employee experience. In May, we released the Benevity Engagement Study—one of the more recent empirical reports that links employee giving and volunteering programs with employee retention. Since it was published, we have seen the study referenced hundreds of times across media as CSR leaders seek to prove what they’ve always known: empowering people to do good through grassroots approaches pays back in greater social impact and up to a 57% reduction in employee churn.

Looking ahead: Companies who continue to run traditional, annual campaigns will struggle to realize the business (and social) benefits of purpose-driven cultures. We will see more HR folks explore corporate Goodness programs as they look for ways to infuse their corporate culture with more purpose, passion and impact—the holy trinity of world-class employee experiences.

Traditionally, corporate giving programs have focused on encouraging people to be more charitable through incentives that drive donation or volunteer activity. But this summer, PayPal took giving further when it launched Missions—Benevity’s latest innovation—to engage more of its global workforce in doing good. With a focus on amplifying their employees’ passion for sustainability, PayPal used Missions to gamify easy-to-complete activities like riding a bike to the office instead of driving, using less plastic, turning off lights, and other small actions employees could take in their daily lives. And it proved to be a gateway to global Goodness! A whopping 64% of the participants were from international offices outside of their California headquarters demonstrating the incredible opportunity for companies to offer modern, more personal forms of doing good to engage employees across geographies, cultures and interests.

Looking ahead: As the lines between people’s lives in and out of work continue to blur, companies that help their global workforce do good on the job in innovative ways, while cultivating a greater sense of purpose and well-being in their personal lives, will reap the benefits of a more engaged, connected and unified culture.

Activism found its place alongside corporate grants in September

This year, we heard a lot about brands taking stands. One of my favorite examples was when Levi Strauss & Co. threw more of its weight behind preventing gun violence. Why? Because they didn’t just make a top-down, unilateral decision about which cause to support and how. They engaged their people in the process and took a holistic approach that so many companies can learn from. In addition to $1 million in grants and the formation of a new coalition of business leaders who are committed to the cause, Levi Strauss & Co. doubled their usual employee donation match to organizations aligned with the cause and expanded their 60 hours per year in paid volunteer time to include political activism. That, to me, is what good leadership (and good business) looks like in 2018 and beyond.

Looking ahead: Companies will recognize that they have more to gain in employee engagement and social impact by embracing traditionally off-limits ways of doing good, like activism or even simply including more organizations in the range of options they allow employees to support through workplace giving programs (like churches and schools which account for most personal giving in North America). 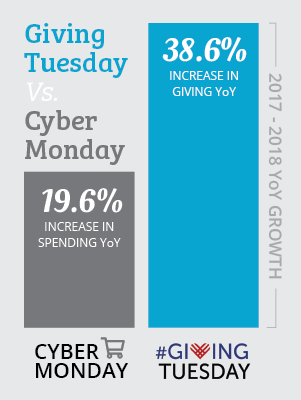 Benevity’s client community was a notable contributor to this growing annual movement, raising $24.7 million on November 27th (and that number has risen to $27.8 million as of this writing.) More than half of the iconic brands that make up Benevity’s client community got involved, logging 81,585 volunteer hours – twice as many as last year! – and supporting more than 18,000 unique causes! Additionally, more than 4,000 activities were logged using Missions. As a marketer, I couldn’t be more pleased to see this global Goodness movement starting to take up more space on the airwaves than ever before!

Looking Ahead: #GivingTuesday will continue to rise in popularity as the day becomes as recognizable and iconic as Black Friday and Cyber Monday. Companies have a huge opportunity to make this global movement a worthy rival of consumerism by going beyond employee engagement initiatives to include their consumers and public stakeholders in campaigns. With their reach and resources, we are daring to imagine a world where #GivingTuesday supersedes Consumer Monday!

The corporate tax windfall started to make business an even greater force for good, but has a lot more untapped potential

December 22nd marked the one-year anniversary of the new tax law that provided big breaks and a big influx of cash to many U.S.-based corporations. And while a few companies like Patagonia, Apple and Boeing pledged to invest part of their tax refunds back into sustainability, employee matching and volunteering initiatives, they are outliers… so far! CNN recently reported that a record-setting $1 trillion is being spent this year on stock buybacks, as much of the touted re-investment in people and innovation has failed to materialize.

Looking ahead: We hope to see more businesses following in the footsteps of companies like Apple in the next year. Imagine the good that could come from the corporate world investing a greater proportion of tax savings back into their people, their passions and their purpose. That could move the needle on so many causes in so many ways! 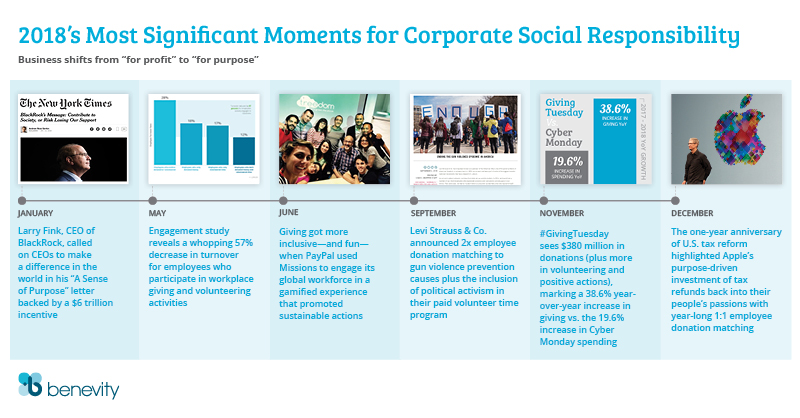 When we talk about Goodness (with a capital G), we’re talking about something bigger and, IMO, better—a guiding philosophy that encompasses everything from CSR mainstays like granting, matching and volunteering to new manifestations of doing good that can help a company realize its greatest potential in the world. With so many companies leading the way this year, 2019 promises to be the year of business as more than just for profit, but for purpose, on purpose.

Contribution from Sona Khosla, Vice President of Marketing at Benevity.

Original article can be found here.

How being kind to others benefits you mentally

How to land a job in Corporate Social Responsibility (CSR) with Kaz Flinn, CSR advisor and former VP of CSR for Scotiabank

Despite dropping out of marketing after her first class, Sona went on to work in marketing at B2B tech companies for more than 15 years. Mid-career, Sona decided to make her lengthy work week “mean something to the world,” jumping at the opportunity to lead Benevity’s Marketing team. As VP of Marketing, Sona is passionate about how companies can foster a culture of passion and purpose and hopes that, through her work at Benevity, she can play a small part in helping companies do that.